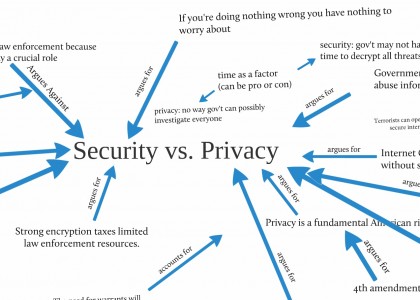 Regular readers of this blog know that I’m a fan of Prezi, a highly nonlinear alternative to PowerPoint and other slide-based presentation tools. Back in September, Prezi rolled out a feature called Prezi Meeting that I’ve been eager to try out in a classroom environment. Today’s lesson lent itself very well to Prezi Meeting, so I gave it a shot. Prezi Meeting provided an easy, fun way for my students to share ideas during class and create a collaborative “map” of a key debate in my course. Immediately below you can see the finished product. Below that you’ll find my brief descriptions of Prezi and Prezi Meeting, as well as an account of how I used Prezi Meeting during class today.

Copy of Math 115F: Security and Privacy on Prezi

What is Prezi? You can try out Prezi yourself fairly easily. Just head to Prezi.com, create an account, and start a new Prezi.  When you do, you’ll be presented with an empty canvas. You can add text, images, videos, and a few built-in shapes (like rectangles and arrows) to that canvas. You can move your content anywhere you like on your canvas and scale it to just about any size. By panning and zooming through the content (either by following a path you’ve constructed in advance or by going off-path and moving about at will), you can show your students the big picture of your content, as well as the details and relationships that make up that big picture. It’s free to create Prezis online and share them online (on the Prezi website or embedded in your own website or blog) or offline (by downloading a self-contained Flash executable file).

The topic today was the challenge of balancing our need for security from criminals and terrorists, which calls for giving intelligence agencies broad power to read encrypted messages, with our right to privacy, which calls for giving the general public access to strong encryption technologies. We’ve discussed this security versus privacy debate several times during the course, and several students wrote their opinion papers earlier in the semester on this topic. Since the students were to have read the textbook chapter dealing with this debate before class today, I wanted the students to get a sense of the possible arguments on both sides of this debate and synthesize what they have learned thus far about the debate.

First, I showed my students how to use Prezi by adding the first few elements to our debate map. The students had seen me present using Prezi a few times, so they were vaguely familiar with the tool. Today, however, I showed them how to create and edit a Prezi. This took maybe five minutes since I just showed them the basics: moving around the canvas and zooming in and out; adding, editing, moving, and rotating text; and adding, moving, and rotating arrows.

I added an argument for security to the Prezi (“Strong encryption taxes limited law enforcement resources.”), then drew an arrow from that argument to the word “Security” that I labeled “argues for” in the manner of a concept map. (Since this map shows the relationships between arguments and not between ideas, I called it a debate map instead of a concept map.) Then I added another bit of text (“Privacy is a fundamental American right.”) and drew an arrow from it to the word “Privacy,” labeling this arrow “argues for,” as well. Finally, to increase the complexity of the debate map, I added a counterargument (“The need for warrants protects law-abiding citizens’ privacy.”) and drew an arrow from it to the statement about privacy, labeling the arrow “accounts for.”

Next, I clicked on “Meeting” to generate a link I then sent via email to my students that gave them access to edit the Prezi I had just created. I had emailed my students yesterday and asked them to bring their laptops to class today, so most students were ready to follow that link, create Prezi accounts as necessary, and participate in the class activity. Their job was to add more arguments and counterarguments to this debate map until we had a fairly comprehensive picture of the debate.

Since Prezi Meeting only allows for 10 users to edit a Prezi at the same time, that meant that not all 15 of my students could jump in, so I asked them to group up. Since some students were working in groups, it wasn’t deathly silent in the room. In fact, their was a lot of conversation within and without the small groups. The students spent a good 10 minutes just getting the hang of Prezi, during which time there was a lot of chatter about how cool the tool was along with a lot of questions about using it.

One problem I quickly discovered is that having 10 people edit a Prezi all at once can be pretty confusing, particularly to those new to using Prezi! When I first realized this, I encouraged the students to spread out (virtually) across the canvas to give themselves more space. However, they were reluctant to do so since they wanted to build on the same set of arguments in the center of the canvas. So after a few minutes, I asked students to get into groups of three students each. That meant that we only had five students actively editing the Prezi at one time which made the collaborative editing process much more manageable for the students.

The other problem I found was that Prezi allows for such freedom of expression that the students started playing around with Prezi more than adding to the debate map. So when I regrouped the students, I also reminded them of their task to add arguments and relationships. It helped that I stressed that every arrow connecting two arguments needed to have a label conveying the relationship between those arguments.  Giving students this simple structure helped them focus on the task.

A third (less critical) problem was that the students didn’t know how to undo some of the strange things they had added to the Prezi. For example, it’s apparently really easy to accidentally add a lot of extra arrowheads to a Prezi once you’ve added your first arrow. (These arrowheads are very short arrows with full-size heads, which is what you get when you click but don’t drag to create an arrow.) The group Prezi soon became littered with these arrowheads. So while the students were working, I jumped in the Prezi and deleted these spare arrowheads. I also took charge of returning the color / design theme back to the standard one when students started playing around with the theme options.

One other move I made during class was to give the students copies of a couple of recent articles on the US government’s interest in “wiretapping” the Internet: “The Case for Wiretapping the Internet,” an InformationWeek article that presents the FBI’s perspective on this issue, and “Web Snooping Is a Dangerous Move,” an editorial by security expert Bruce Schneier. I told students that if they were having trouble contributing to the debate map that they should read these articles looking for additional arguments to include. The final debate graph (above) shows evidence that a few students took me up on this.

After about 30 or 35 minutes of small group activity, I reconvened the whole class and debrief the activity, asking the students to identify arguments they found particularly compelling on either side of the debate and to suggest reasons why the debate is important to society and to individuals. Earlier in the class I had polled them about their TSA experiences with body scans and pat downs while traveling over Thanksgiving break, so it wasn’t hard for them to make connections between the debate at hand and other questions of security and privacy! (Of the 10 students who flew over break, only two of them had TSA body scans. None had pat downs.)

How would I evaluate this activity? It was certainly engaging and fun for the students and for me. The students also managed to create an interesting and somewhat comprehensive debate map in a very short time frame. I think I introduced the students to a process (debate mapping) and a tool (Prezi) that they might use when planning their final papers for the course. And the activity gave me a chance to make the point that, although there are lots of arguments on either side of this debate, there are still decisions to be made regarding security and privacy, so it’s not just all opinion.

However, it’s unclear to me at this point what the students got out of the activity. They were engaged throughout class today, but when I asked them what aspects of this debate they saw in a different light because of the debate mapping activity, they didn’t say anything. That may have been because they were so busy adding arguments to the map that they didn’t take much time to analyze the arguments others added. The fact that the students added only one “accounts for” arrow to the map supports this hypothesis. Next time, I’ll want to think about how to have them engage more intentionally with the debate map as it is constructed. In the short term, I’ll also want to think about adding a question to my end-of-semester evaluations about this activity!

All in all, this was a great first experiment with using Prezi Meeting during class. If you’ve tried something similar or just have some thoughts on how you might use Prezi Meeting in your class, I’d love to hear from you in the comments!