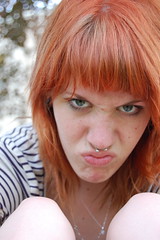 I received an inquiry from a colleague recently asking my thoughts on the use of a “Are you here?” clicker question asked at the beginning of class to take attendance.   Since this isn’t an uncommon question I hear, I thought I would weigh in on it here on the blog.

In general, I would advise against the use of an attendance slide for the following primary reason:  Surveys of students regarding their opinions of clicker use consistently indicate that students have negative reactions to being “monitored” by clickers.  Students prefer to use clickers in ways that more clearly and explicitly benefit their learning.

For instance, in a 2007 study by Graham, Tripp, Seawright, and Joeckel, the primary reasons for negative student feelings about clickers were technical problems, the cost of the devices, the use of clickers for grading, and (most relevant to this discussion) the use of clickers to mandate attendance.

Similarly, in another 2007 student opinion study, Trees and Jackson (citation here) wrote, “Students were apathetic or negative toward clickers when the technology did not change the classroom experience in a self-evident manner.  Students need to be able to accomplish different things through the use of clicker questions than could be accomplished by simply listening to a lecture of the same material.”  Since an attendance question doesn’t add anything to the students’ learning experience in class, students are likely to be “apathetic or negative” toward such a use, particularly if the students are the ones purchasing the clickers.

Since students are more positive about the use of clickers when they are used to clearly enhance their learning, I would suggest that instead of using a stand-alone clicker question for attendance, it’s usually better to infer attendance from another clicker question, one that is designed to help students engage more deeply with the material.  For instance, if you have students engage in peer instruction around a clicker question, the students will have a valuable learning experience, and you’ll still be able to determine from the response system reports which students were present that day in class.

Another option that many instructors implement is to start class with a “warm-up” question, typically an “easy” question about the reading or the previous class or an off-topic, sometimes funny question (perhaps about some recent event in pop culture or campus news).  Some instructors will have this question displayed on-screen as students arrive as a reminder to them to take their clickers out and get ready for future clicker questions during class.

For example, here’s a warm-up question I used last fall the week after the MTV Video Music Awards:

What do you think of Kanye West’s treatment of Taylor Swift at the MTV Video Music Awards?

This question had nothing to do with linear algebra, but it did provide a fun way to start the class session.  (If you’re interested, the top answer was “He’s a jerk” with 43% of the vote.  Runner-up with “He had a point” with 29%.)  Warm-up questions allow instructors to take attendance while also providing something else of value to the students–a friendly reminder to gear up for class and perhaps an icebreaker moment at the start of class.

I’ll also point out that if you include clicker questions as part of students’ participation grades in your course, even if you’re just grading on effort and not accuracy of their answers, you are effectively mandating attendance.  However, it seems that students see participation grades much more favorably than they do attendance policies.

Do you take attendance with clickers?  If so, how?