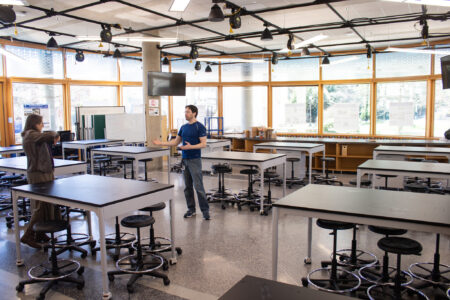 A new study on active learning classrooms (ALCs) was recently covered in both Inside Higher Ed and the Chronicle of Higher Education. “Separated by spaces: Undergraduate students re-sort along attitude divides when choosing whether to learn in spaces designed for active learning” by University of Kansas researchers Michael Ralph, Blair Schneider, David Benson, and Douglas Ward examines the reasons organic chemistry students provide for switching from traditional lecture halls to ALCs when given the chance. The authors make the argument that since more women in the study wanted to transfer to the ALC but couldn’t due to lack of space, increasing ALC capacity on classrooms might encourage more women to pursue the sciences.

This isn’t the first time I’ve seen an equity and diversity argument for active learning classrooms, but this kind of argument is fairly new in higher education. Back in 2018, when I blogged “Active Learning Classrooms: What We Know,” I didn’t include that argument, since it wasn’t a big part of the discourse around ALCs at the time, but it was there in the literature. Some studies follow, but first a recap of what I mean by “active learning classroom.” An ALC is a formal learning space that includes affordances for student collaboration, like tables, whiteboards, and digital displays that small groups of students can gather around, as well as a polycentric layout, that is, a layout without a clear “front” of the room. Some ALCs have a lot of digital technology, some have less, but all are intentionally designed to foster active and collaborative learning.

For example, a 2013 study by Sehoya Cotner, Jessica Loper, J. D. Walker, and D. Christopher Brooks studied two sections of the same biology course taught by the same instructor, one in a traditional lecture hall and one in an ALC. The instructor used the same syllabus, same course goals, and, to the extent possible, the same teaching strategies in both sections. “Using ACT scores as predictive,” the authors write, “we found that students in the active learning classroom outperformed expectations, whereas those in the traditional classroom did not.” That is, students in the ALC who might be predicted to do poorly in the course based on their test scores did better than predicted. To the extent that standardized test scores correlate with privilege in a particular academic domain–and there’s evidence that they do–ALCs might then level the playing field, at least a little.

Or take a 2014 study by Elisa Park and Bo Keum Choi. They studied student learning, student perceptions, and student seating patterns in both a traditional lecture hall and an ALC. Their data indicated the existence of a “golden zone” in the traditional classroom, an area near the front of the room occupied by students who tended to do better in the class, and a “shadow zone,” an area near the back of the room where students tended to do worse. That is perhaps not surprising and perhaps not causal, but the researchers also found that the students who sat in the golden zone did so because of existing social networks or the ability to get to class early, two things that might be easier for more privileged students. There were no such zones in the ALC, indicating a more equitable experience for all students. Moreover, they found that in the traditional classroom, it was mostly the high GPA students who engaged in active and collaborative learning during class, where in the ALC, all students tended to do so, again pointing to the ALC as a more equitable learning space.

There’s another piece of the University of Kansas study that interests me. From the Chronicle story about the study:

Students moving into the active-learning classrooms showed a more sophisticated understanding of how people learn, based on questions they were given. (For example, knowing that learning is not the same as memorization.) Meanwhile, students who started in an active-learning classroom and switched to a traditional one had lower initial scores on how people learn, which then declined over time.

I’m not quite sure what to make of this as it relates to equity and diversity, but it’s definitely interesting that students with a better understanding of how learning works sought out ALCs in this study. If nothing else, the fact that students who were poorly informed about learning switched to classrooms less likely to help them learn speaks to the need to help students better understand their own learning process.

I’m spending this academic year as a visiting associate director at the Center for Excellence in Teaching and Learning at the University of Mississippi. Part of my work there will be supporting STEM faculty who will be teaching in the university’s new Jim and Thomas Duff Center for Science and Technology Innovation, an academic building opening in 2024 that’s full of active learning classrooms. Expect to see more posts here from me about ALCs in the coming months as I dig into the literature that’s come out since my 2018 review. I’m excited to see institutions investing in ALCs, and I look forward to learning more about how they can help the STEM fields create more inclusive learning experiences for students. If you know of other studies that draw a line between ALCs and equity, please let me know!