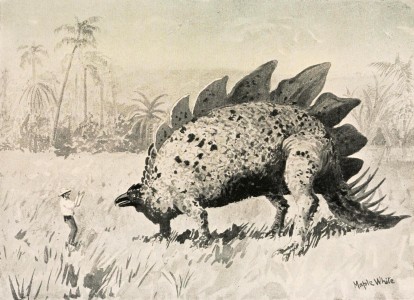 I’m a few weeks behind on the podcast, so I haven’t gotten to the dinosaurs yet (spoiler alert!), but I wanted to share a few fun quotes from Chapter 5 that are on-topic for the blog. In this chapter, Professor G. E. Challenger presents his case for the continued existence of saurians in South America at a public talk given by a prominent academic, Mr. Percival Waldron.

Mr. Waldron is introduced by Professor Ronald Murray, whose public speaking style is described as follows:

“Professor Murray will, I am sure, excuse me if I say that he has the common fault of most Englishmen of being inaudible. Why on earth people who have something to say which is worth hearing should not take the slight trouble to learn how to make it heard is one of the strange mysteries of modern life… Professor Murray made several profound remarks to his white tie and to the water-carafe upon the table, with a humorous, twinkling aside to the silver candlestick upon his right.”

Ever been to an academic talk like this? Sometimes, even the smallest changes in delivery, like speaking up a little or ditching overly busy PowerPoint slides, can make a world of difference.

Mr. Waldron, on the other hand, has a gift for public speaking:

“He was a stern, gaunt man, with a harsh voice, and an aggressive manner, but he had the merit of knowing how to assimilate the ideas of other men, and to pass them on in a way which was intelligible and even interesting to the lay public, with a happy knack of being funny about the most unlikely objects, so that the precession of the Equinox or the formation of a vertebrate became a highly humorous process as treated by him.”

Communicating science in ways that the general public can understand and appreciate it? That sounds like a valuable skill to me, but surly Professor Challenger discounts Mr. Waldron’s gifts:

“Popular lectures are the easiest to listen to, but Mr. Waldron will excuse me when I say that they are necessarily both superficial and misleading, since they have to be graded to the comprehension of an ignorant audience… One smallest new fact obtained in the laboratory, one brick built into the temple of science, far outweighs any second-hand exposition which passes an idle hour, but can leave no useful result behind it. I put forward this obvious reflection, not out of any desire to disparage Mr. Waldron in particular, but that you may not lose your sense of proportion and mistake the acolyte for the high priest.”

To use today’s terminology, Professor Challenger is no fan of learner-centered instruction. Nor does he see value in any sorts of scholarship aside from the scholarship of discovery. Charming fellow, isn’t he?

Challenger is a big fan of peer review, however:

“Truth is truth, and the noise of a number of foolish young men—and, I fear I must add, of their equally foolish seniors—cannot affect the matter. I claim that I have opened a new field of science. You dispute it. Then I put you to the test. Will you accredit one or more of your own number to go out as your representatives and test my statement in your name?”

It’s one thing to read a colleague’s paper before it’s published in an academic journal. It’s quite another to journey to the heart of the Amazon in search of dinosaurs for the sake of peer review!

I’m not expecting more of these kinds of quotes in subsequent chapters as the dinosaur action heats up, but I sure got a chuckle out of this depiction of early 20th century academia, which is not that different from early 21st century academia, it seems.

Image: Illustration from The Lost World (1912)