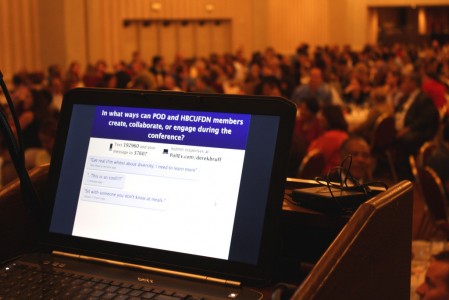 A couple of weeks before the POD Network / HBCU Faculty Development Network joint conference, POD Network president Phyllis Dawkins of Dillard University emailed a few people, including me, asking about ways to use technology to make her presidential address at the conference more interactive. We tossed out a few ideas and by the morning of the address had settled on using Poll Everywhere as part of a think-pair-share activity. Phyllis, Bonnie Mullinix of Greenville Technical College and the TLT Group, and I worked out the details, and I served as Phyllis’ on-the-spot tech support during her address. Here’s how things played out…

Since this was a joint conference between the POD Network and the HBCU Faculty Development Network, during her presidential address, Phyllis posed this question: “In what ways can POD and HBCUFDN members create, collaborate, or engage during the conference?” (“Create, Collaborate, Engage” was the theme of the conference.) Phyllis asked the 600+ people in the room to brainstorm responses to this question (“think”), discuss their ideas at their tables (“pair”), and submit their ideas via Poll Everywhere (“share”). 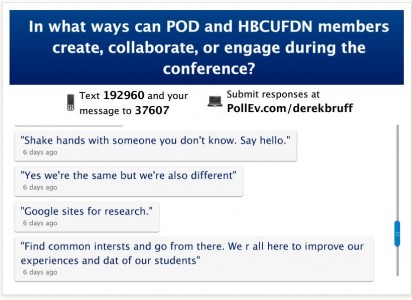 Poll Everywhere lets people submit answers via SMS text-messaging and via the Web, which meant that Phyllis started this activity by instructing conference participants to take out their cell phones–something you don’t often hear during a keynote a address! As participants generated ideas, they followed the on-screen instructions (seen here) to share their answers with the entire room. The answers started streaming in, and Phyllis commented on a few of them as they were projected on the big screen.

Once we felt that most people had responded, I used Poll Everywhere’s relatively new word cloud feature to quickly export the entire set of responses to Wordle, a free online tool for generating word clouds. Within seconds, I projected a word cloud of the responses (seen below) in which more frequently used words appeared in larger font sizes. Then Phyllis offered some additional commentary, noting the frequency of the words “together,” “share,” “talk,” and “exchange.” 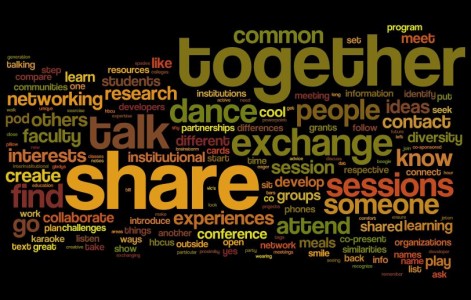 I had implemented this kind of activity a couple of times before, back in August at some on-campus orientations. But I hadn’t tried it with more than 600 people in the room. My biggest fear was some kind of technical problem, but the entire process went exactly as planned, with no problems whatsoever. We ended up with 157 responses–not everyone in the room, but a good quarter of them. Most responses (87%) came in via text messaging, with 13% coming in via the Web.

The feedback on the activity was incredibly positive, both in person and on Twitter. For instance:

Moreover, when Henry Findlay, the president of the HBCU Faculty Development Network, got up to deliver his presidential address, he talked his use of student cell phones to teach statistics and encouraged all present to consider ways that mobile learning can help us implement what we know about effective teaching from the field of cognitive science. Phyllis told me later that she had no idea Henry was going to talk about mobile learning when she planned our Poll Everywhere activity!

All in all, it was a good night for mobile learning and creative engagement. Thanks to Phyllis Dawkins for being willing to experiment and to Poll Everywhere for helping us make this happen on very short notice.

Image: “Mobile Learning, For the Win,” by me, Flickr (CC)

2 Responses to "Mobile Learning on the Big Stage (#PODHBCU)"