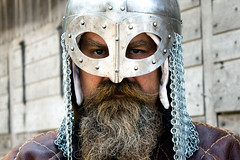 On his “Old is the New New” blog, Rob MacDougall recently argued that the question “If a viking and a samurai fought, who would win?” has great potential for helping students learn to think critically.  Here’s why:

Take a counterfactual question–as far as I know, vikings never fought samurai–and have at it. You can enter this debate with any level of starting knowledge, arguing solely from the evidence in the pictures (that samurai looks pretty fierce, but the viking has his buddies with him). Yet there is no bottom to the amount of evidence you could gather or the complexity of the arguments you could marshal on either side. You could talk about military tactics or metalworking technology. You could research the agricultural potential of Scandinavia or the codification of Bushido. You could spin out a whole saga in which a Nihonese armada devastates the Vinlander entrepots at “Perleshavn” and vengeful Norsemen go a-viking into the Inland Sea.

This is a great example of how a simple, multiple-choice question (even one with merely two answers!) can potentially be used to generate rich in-class discussions.  I don’t know if Rob MacDougall has used his vikings vs. samurai question as a clicker question, but just imagine how well it would work as one!  I can see students getting pretty fired up over the results of such a clicker question.  Poll the students, then have them discuss the question as a class, then poll them again to see if they’ve shifted opinions, then discuss further and poll perhaps a third time.

Here’s Rob again, in one of the comments on the post:

The conversations I’ve had in the last few days about samurai and vikings, with everyone from a 3 year old to a professor of Japanese history, suggest to me that even banal questions can scale to accommodate multiple levels of historical knowledge.

Plus, vikings versus samurai?  How cool is that?

Update: Rob MacDougall’s follow-up post, “Would You Rather,” features more counterfactual questions, ones that point students toward social history and material culture rather than military history and the history of technology.