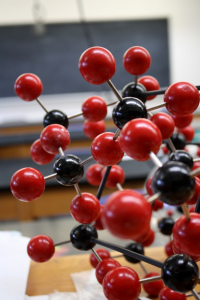 “Spatial arrangements convey meaning.” That’s what I tell people when they ask for advice on using Prezi, the zooming presentation tool. That’s also the theme of the First Annual Agile Learning Educational Prezi Awards, whose winners I’m announcing here on the blog today as part of Presentation Makeover Week, organized by the University of Notre Dame’s Chris Clark.

A couple of weeks ago, I invited nominations for this totally made up competition, because I didn’t think that the winner of Prezi’s recent “Best Educational Prezi” made good use of spatial arrangements to convey meaning. I was confident that there were educational prezis out there that did a better job using Prezi’s visual tools — the wide-open canvas, the ability to pan and zoom, perhaps even rotations — to convey meaning and aid understanding. And I was right, as you’ll see when you view this year’s winners!

There’s a lot to like in Daniela’s prezi, which is easy to follow even with my rudimentary Spanish skills. Consider, for instance, her use of the visual of a funnel to convey the idea of originality: 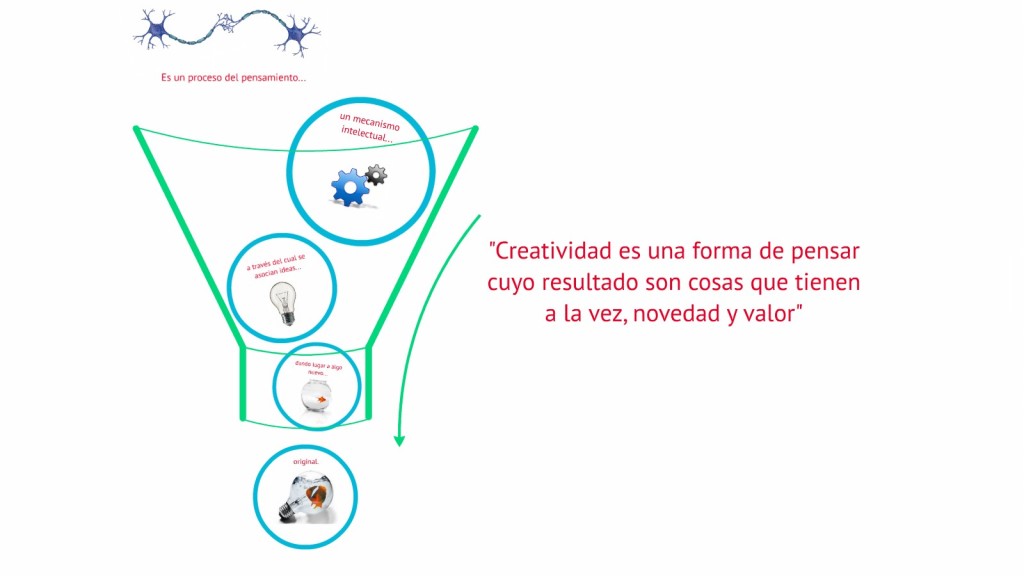 Or her use of diagrams within diagrams and Prezi’s zooming ability to show the processes and sub-processes involved in creative thinking: 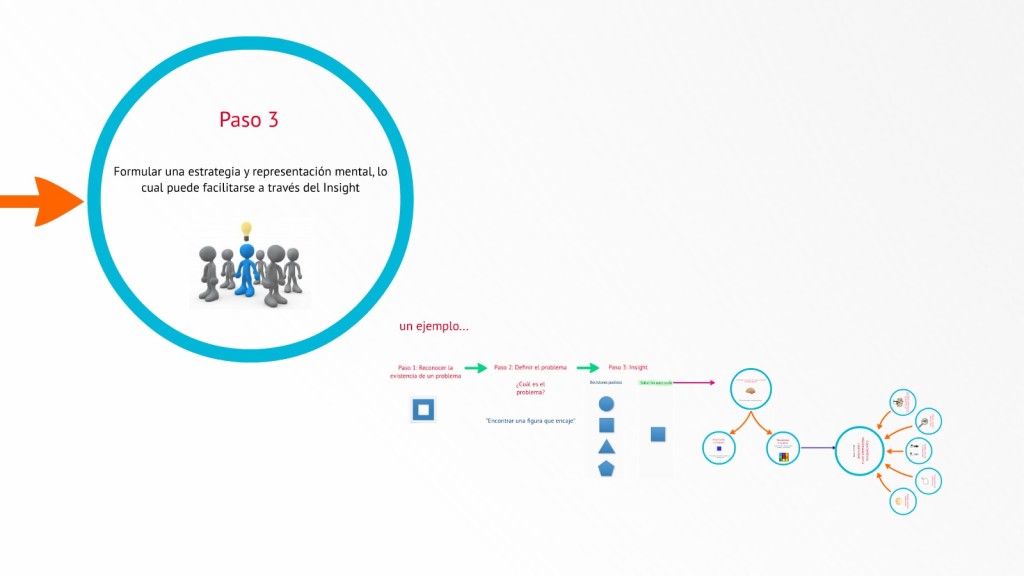 Daniela’s presentation is visually interesting, but it’s also visually sophisticated, using Prezi’s panning and zooming tools to lead the viewer through the structure of the ideas she’s sharing. “Spatial arrangements convey meaning.” This is exactly the smart use of Prezi I was hoping to see in this competition. Congrats on an excellent presentation, Daniela!

One small suggestion for improvement: At an appropriate point along the presentation path, add a frame like the screenshot immediately above, to make more explicit how the processes and sub-processes of creative thinking relate to each other. Zooming out occasionally to see the “big picture” goes a long way to helping learners organize their mental models of the subject at hand.

Jamison’s prezi doesn’t use diagrams as effectively as Daniela’s, but it does feature a couple of “big picture” moments that work well. For instance, after drilling down on particular aspects of running a restaurant, usefully grouped by theme… 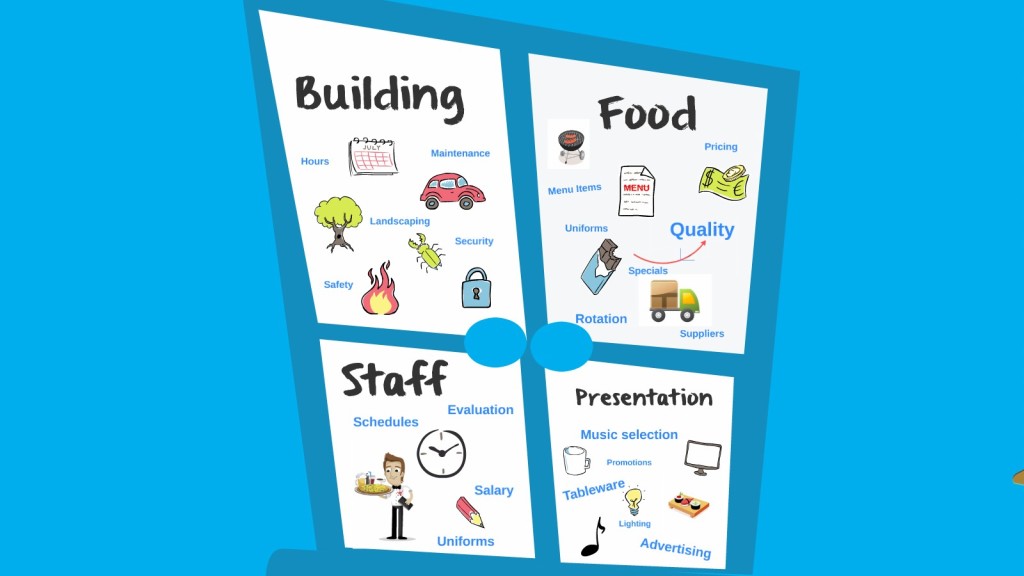 …the prezi illustrates how these aspects combine to produce the larger result the restaurant owner is after: revenue. 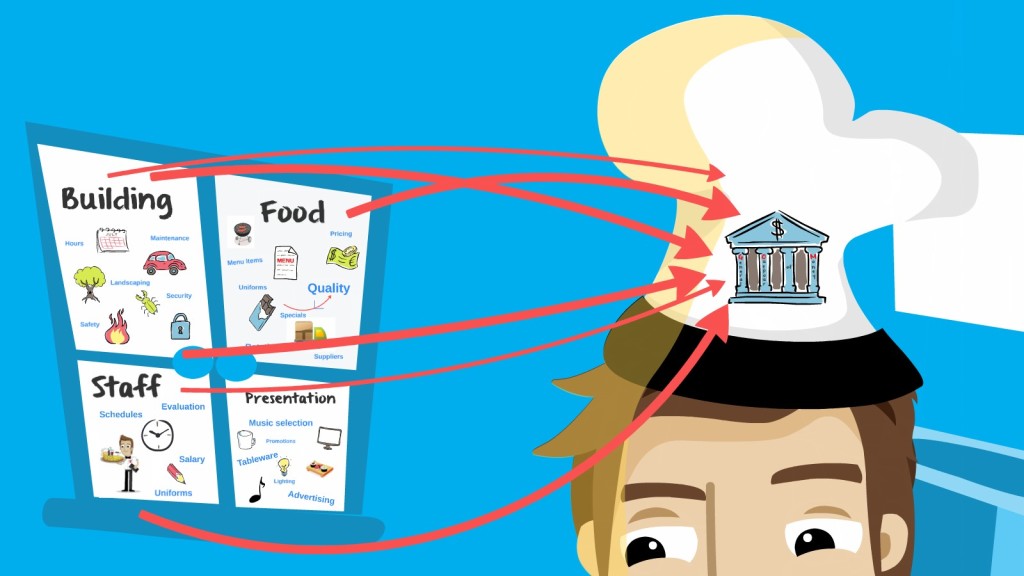 This visual sets up nicely the idea behind general outcome measures, that measurements of specific skills can be used to make inferences about student performance on more complex tasks.

The prezi ends by zooming out to the full canvas, using spatial arrangements and some goofy clip art to show that curriculum-based measurement combines the strengths of general outcome measures and mastery measures: 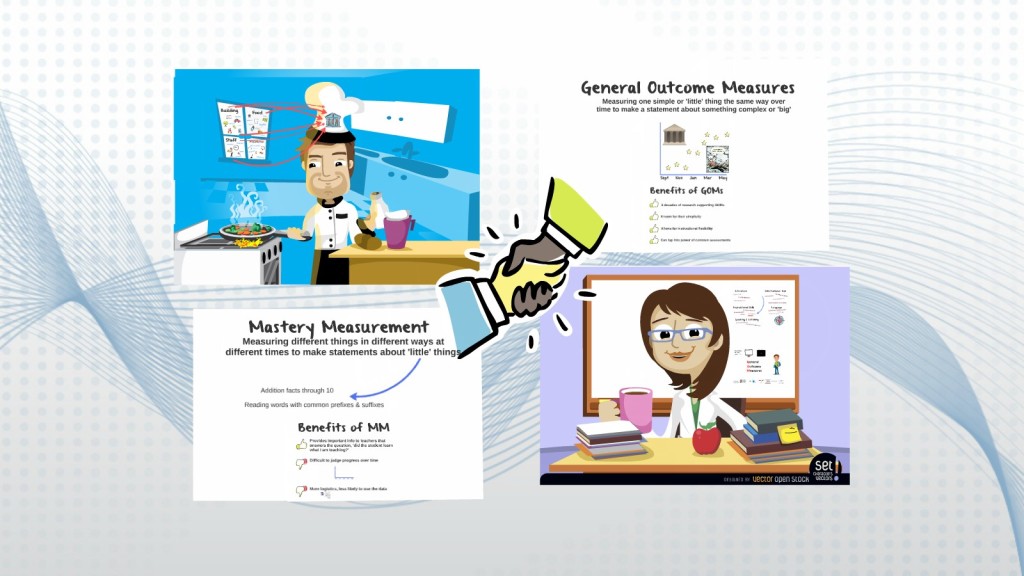 If I had a recommendation for Jamison, it would be to think beyond quadrants. Spatial arrangements don’t have to be complex to be effective, but it’s useful to have more than one go-to way to arrange ideas on a canvas.

I’ll note there that Prezi provides lots of templates these days for organizing one’s presentation. My advice: Ignore the templates. Begin with a blank canvas, start adding words and images to represent your ideas, and figure out the spatial arrangement that best shows relationships among those ideas. It’s more work, but you’ll likely end up with a more visually useful organization to your presentation.

Honorable Mention: “Should We Grade Art Students?” by Natasha Haugnes

Natasha’s prezi uses an iceberg as a metaphor to discuss how instructors’ attitudes, beliefs, and knowledge affect their grading practices, with those practices the proverbial tip of the iceberg. As someone who is often thinking about ways one’s understanding of learning affects one’s teaching practices, I really liked this visual metaphor!

I’ve been a fan of visual metaphors since I read Garr Reynolds’ excellent book, Presentation Zen. A good visual metaphor can help learners both understand and remember a concept. I received several nominations of prezis structured around strong visual metaphors. Had this year’s theme been “Visual metaphors aid understanding and memory” and not “Spatial arrangements convey meaning,” we might have had different winners! Maybe next year?

Here’s another prezi with an engaging visual metaphor…

Fair warning: This one gets a little meta. Anastasia’s organizing visual metaphor is that of the bookshelf or library. Just as digital libraries both replicate and expand on traditional print structures, her interactive prezi both replicates and expands on a traditional slideshow. Go ahead, pan and zoom around her prezi, or any other one, ignoring the path laid out for you by its designer. You’ve entered a digital Choose Your Own Adventure presentation.

Natasha and Anastasia both used visual metaphors to organize their prezis. It can also be effective to use visual metaphors within a prezi to illustrate key concepts and ideas. One advantage: If you’ve used compelling images, especially photos, to represent important concepts, when you zoom out to show the “big picture,” those images are still visible as thumbnails, helping the viewer see how the corresponding concepts fit into your overall organization. If you represent ideas with lots of text, that text won’t be readable when you zoom out.

You might give this one a few minutes to load before you press play. It’s gigantic! Created to support a six-hour astronomy course, this mind-blowing mind map deserves an honorable mention here for sheer audacity — and a few clever visual moves. Andrew’s prezi is cluttered, but if you take your time as you move through it (as you would in a six-hour course), you’ll see some structure appear. At several points in the presentation, Andrew revisits earlier material, which is a nice touch that leverages Prezi’s canvas, and he does some really useful things with scale and zoom, as you might expect in a good astronomy presentation.

Andrew’s prezi, like many nominations I received, makes liberal use of Prezi’s rotation ability. When Prezi first hit the scene back in 2009, that rotation ability got a lot of attention. Many people viewed Prezi as nothing more than PowerPoint with fancier (and perhaps more nauseating) slide transitions. Unfortunately, many people still see Prezi this way, six years later, as evidenced by the comments on Anastasia Salter’s ProfHacker post about my little contest.

A good prezi isn’t about movement, it’s about mapping. “Spatial arrangements convey meaning,” remember? Panning and zooming aren’t just slide transitions. They’re tools that should help the viewer see relationships among ideas mapped in sensible and useful ways on a prezi canvas. You can pan across a diagram showing a sequence of steps in a process, as Daniela did in her prezi. You can zoom in to show details, then zoom out to show the “big picture,” as Jamison did in his prezi. Creating a visually useful prezi involves mapping out one’s content spatially, then laying down a path that guides the viewer through that map in a way that shows spatial arrangements.

In theory, Prezi’s rotation ability should be useful in taking the viewer through certain kinds of spatial arrangements. In practice, rotations are awfully risky. Sitting down the other night to review the nominations for this contest, I had to take breaks every so often to avoid getting nauseated. My advice: Use rotations only when absolutely necessary to convey an idea. Never use a rotation simply as a transition. Any rotation you include should have a conceptual reason behind it.

For similar reasons, don’t pan or zoom too far too quickly. That, too, can cause dizziness. If necessary, insert an intermediate point on your path so that you pan or zoom in stages. That’s the advice I offered for effective Prezi use back in 2011, and it’s still good advice today.

With that, I’ll conclude this year’s Agile Learning Educational Prezi Awards. Thanks to all those who submitted nominations and those who helped spread the news about the awards. Special thanks to Chris Clark, for organizing Presentation Makeover Week and for helping judge this year’s awards!

If someone will remind me, I’ll host the Second Annual Agile Learning Educational Prezi Awards in January 2016! I’ll need a theme, of course. Visual metaphors, perhaps? Or something about the narrative aspects of Prezi, as suggested by Alan Levine? We’ll see! In the meantime, I hope this year’s awards have inspired you to think more deeply about how you use visual communication tools in your presentations and lectures.

2 Responses to "Announcing the Winners of the 2015 Agile Learning Educational Prezi Awards!"